Green solutions for a range of fences

Green solutions for a range of fences

The task of supplying environmentally friendly fence materials, has in the past, been difficult to
achieve. 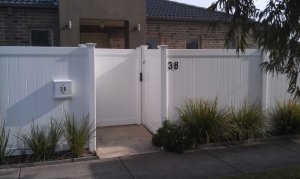 With more customers wishing to leave a smaller footprint on the planet and their immediate
surroundings, today’s hi-tech, rigid PVC fences are an environmentally friendly, long lasting fence
solution that is attracting a lot of advocates and converts.

“More than 50 percent of rigid PVC is made from sodium chloride, or
common salt and the balance from ethylene, making it the most energy efficient plastic.“

Unlike timber, rigid PVC does not require painting or treatment with potentially dangerous
chemicals, like arsenic, to protect it from rot or termites.

Suitable for domestic, commercial and rural use, PVC fences are also better during a fire as they are self-extinguishing.

“this means they will not sustain or add to a fire. As soon as the flame is removed, it will stop burning, unlike wood which will actually add to the fire. PVC does not smoulder and does not leave burning embers. However any fence, whether made from wood, PVC or other material will be damaged to varying degrees by fire.”

Thanks to advanced technology and stringent testing, the strength and durability of Polvin PVC fences makes it an attractive alternative to wood and metal. Overseas-made PVC fences are not designed for Australian conditions. However, Polvin’s Australian made PVC fences will withstand Australia’s higher UV rates and last more than 50 years.

Most people are aware that rigid PVC will outlast timber many times over. Even though the initial investment in PVC is similar to other types of fencing, PVC’s low maintenance benefits makes its total cost, over its lifetime, significantly lower.

At the end of its life, rigid PVC is fully recyclable, multiple times. However, if it is sent to landfill, rigid PVC will not leach chemicals and other preservatives into the soil.